Notice SJCOG Offices Closed until further notice. All of our meetings will be remote meetings through Zoom. Read On... 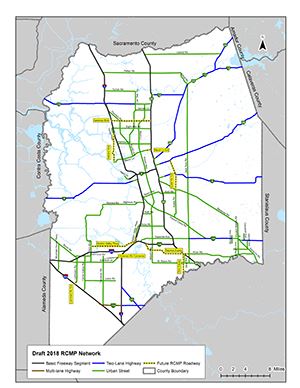 A RCMP policy report is mandated to be updated approximately every two years, with a monitoring report prepared after each adopted policy document.

The goal of the RCMP is to have new land uses developed in tandem with the necessary transportation network improvements by coordinating the land use, air quality, and transportation planning processes.

The RCMP is a coordinated process to monitor congestion, identify congestion problems, and program funding towards projects that reduce regional congestion. The RCMP includes strategies for the safe and effective management of the regional transportation system such as monitoring and maintenance, demand reduction, land-use analysis and mitigation, operational management strategies, and strategic capacity enhancements. As such, implementing the RCMP fosters a holistic, well-rounded approach to transportation planning that includes consideration of multiple goals, including economic vitality, safety, livability multimodal choices, and the environment.

In June 1990 California voters approved legislation which increased funding for California’s transportation system. With the passage of Proposition 111 there were new requirements for the transportation planning process that requires urbanized counties, such as San Joaquin County, to prepare, adopt, and biennially update a Congestion Management Program (CMP).

The 2005 Federal transportation bill, the Safe, Accountable, Flexible, Efficient Transportation Equity Act: A Legacy for Users (SAFETEA-LU), also requires the development of a Congestion Management Process (CMP) that is fully integrated into the regional transportation planning process in order to provide for “safe and effective integrated management and operation of the transportation system.” This requirement was carried forward in all subsequent Federal transportation bills including the most recent Fixing America’s Surface Transportation Act (FAST Act). Of particular note, in counties that are designated as nonattainment of federal air quality standards such as San Joaquin County, federal regulations require certification that any project resulting in a significant increase in SOV (Single Occupancy Vehicle) carrying capacity (with the exception of safety improvements and bottleneck elimination projects) be addressed through the CMP. Before federal funds are advanced, the CMP must demonstrate that the capacity increasing project is warranted by first implementing feasible travel demand reduction and operational management strategies. If, after all strategies have been analyzed/implemented and the capacity increasing project is justified, federal regulations required that the CMP identify strategies to manage the facility effectively.

At the local level, the 2006 Measure K Renewal ordinance included a requirement to support and develop a Regional Congestion Management Program (RCMP). The SJCOG RCMP satisfies the requirements of this local mandate as well as the state and Federal CMP requirements.

The RCMP Network consists of Roadways, Intersections, Bikeways, and Multi-Modal Corridors, described in further detail below:

Roadway Network
The roadway network is a core network of key transportation facilities that facilitate regional travel within San Joaquin County. At a minimum, state statute requires that all state highways and principal arterials be designated as part of the RCMP roadway network. Local arterials must represent routes of regional significance. Per state statute, once a route is designated as part of the RCMP system, it cannot be removed

Multi-Modal Corridors
State and federal mandates require the consideration of all major modes of travel as part of a Congestion Management Program (CMP). Additionally, the California Complete Streets Act (AB 1358) requires counties and cities to include policies that take all roadway users into consideration (bicyclists, pedestrians, transit riders, motorists, children, senior citizens, mobility impaired, and freight movers) as part of their general plan updates. In recognition of these legislative mandates, SJCOG, in coordination with its member agencies identified a sub-set of the RCMP network to be designated as RCMP multimodal corridors. RCMP multimodal corridors are defined as sections of the RCMP roadway network where the operational performance of pedestrian, bicyclist, transit passenger, and motorist is to be considered and analyzed holistically. The concepts and method to compute multimodal level of service (MMLOS) is documented in the 2010 Highway Capacity Manual.

The RCMP Traffic Monitoring Program provides the mechanism to yield the requisite traffic counts and related data to address the state RCMP vehicular LOS standards and the established multi-modal state/federal RCMP performance measures. The RCMP turn movement and roadway traffic count data base will serve as a countywide resource.